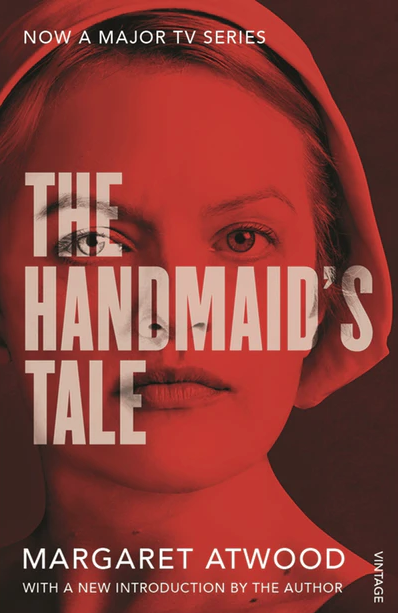 I can’t help feeling we are living in the dystopian kingdom of Gilead.

The Handmaid’s Tale is a story of life (really death) in the dystopia of Gilead which is ruled by a fundamentalist regime that treats women as property of the state. Women whose middle-class lives vanished overnight are now kept in servitude by elite couples, raped and forced to bear the infertile couple’s children. I know we have not reached this stage yet but certain aspects of our present lockdown over a virus scam remind me of the life that June, now called Offred (after the commander) is forced to endure.

She can leave the house only on shopping trips, the door to her room cannot be completely shut, and the Eyes, Gilead’s secret police force, watch her every public move.

During the series we witness flashbacks of the events leading up to the beginning of Margaret Atwood’s famous novel. Before she was brutally abducted June was happily married to Luke and the mother of his child. She was an independent career woman as was her best friend Moira who also finds herself a prisoner of Gilead.

Gilead has arisen in what was once known as the United States of America. Everyone except straight, white, Christian men are subjugated, killed outright by the government, or disposed of by transportation to the “colonies,” a toxic wasteland where people die slowly. Handmaids are the objects of upper class men, to be used exclusively for their fertility.

The terrified women of Gilead are supervised by a grotesque woman known as ‘Aunt Lydia’. Far from your friendly loving aunt, Lydia’s cruelty is palpable. On one occasion Offred’s new friend makes the mistake of talking and sniggering while Lydia is speaking and for her sin has her eye extracted.

This series comes to mind as I contemplate our present world. One where we are forbidden to live out our normal lives. Where nations’ economies are collapsing, children are no longer going to school, libraries, museums, restaurants have all been closed down and where millions are now out of work.

As the obscene Lydia inducts the new group of traumatised young women into the torrid life of Gilead she tells them:

Girls I know this may seem very strange. But ordinary is just what you have been used to. This may not seem ordinary to you right now but after a  time it will. This will become ordinary.

How long will our lives be locked down? Will it become ordinary? Day by day those in power put more restrictions on our lives. Merely a month ago we were going to work, joining friends in social outings, attending concerts, going to weddings and functions and all of a sudden this normality has become illegal.

Overhead drones are employed to track and remind people that it is illegal to gather. Around Australia public beaches have closed on the pretence that those attending were not keeping their distance and might spread a virus.

Please I can’t take much more of this stupidity.

The friendly chats once a highlight of my walks are now absent. In their place I see sad and fearful faces. Today I could almost hear myself muttering ‘Blessed Day’  as a fellow walker edged herself quickly away.

Atwood’s imagined Gilead may be actually dystopian — as opposed to the only-slight-off from dystopian world we’re living in today. All it took to build Gilead, though, was the silence of those that would resist and the vast expansion of government power.

We are duly warned.