Vaccine for boys cannot lead to reduction in cervical cancer

The HPV vaccine for boys raises hope of eradicating cervical cancer according to Laura Donnelly, health reporter at The Telegraph

Giving boys the vaccine protects girls from the human papilloma virus (HPV), which is passed on through sexual contact

A year ago I wrote a blog stating that UK boys and their parents would at last be able to breathe a sigh of relief after the decision had been made not to vaccinate boys against the human papilloma virus (HPV).

But there’s been a change of plans and from September this year UK boys aged 12 and 13 will also be given the jab at school.

Professor Beate Kampmann, director of the vaccine centre at the London School of Hygiene and Tropical Medicine, states: “This decision is a triumph for gender equality in cancer prevention” adding:

It’s pleasing to see the UK follow the example of other countries like Australia, where the vaccine has been implemented for girls since 2007 and for boys since 2013

There is no disputing gender equality particularly in regard to injury following HPV vaccines. 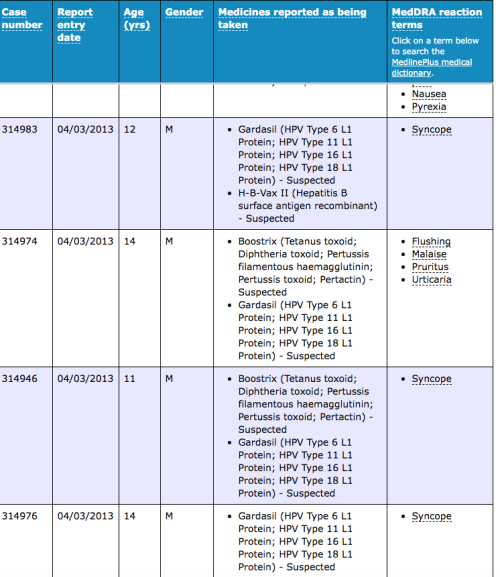 According to the TGA’s database of adverse events following Gardasil, injury to boys is occurring on an alarming basis just as it is for girls.

The following adverse events have been spontaneously reported during post-approval use of GARDASIL and may also be seen in the post-marketing experience with GARDASIL 9.

There is no proof that HPV causes cervical cancer.

HPV is a very common wart virus. Over 80 percent of us are affected by this virus at some stage in our lives. Most of this infection is cleared by the body within two years. Less than one percent of the world’s women develop cervical cancer. And yet boys and girls all over the world are being injected with these dangerous vaccines with devastating results.

On June 19, 2013, Joel Gomez, a healthy 14-year-old boy had his first dose of Gardasil. Joel did not report any adverse reactions following this first vaccination to his family or his physician. Then two months later he was given a second injection of Gardasil after which he went home and went to sleep. He was found unresponsive in his bed the following morning.

According to Dr Sin Hang Lee in his expert report in the Matter of Gomez v. United States Department of Health

In the opinion of this author, there is sufficient evidence based on which to conclude that the vaccine Gardasil is capable of causing sudden unexpected death in certain predisposed vaccinees and that Gardasil did cause or contributed to a myocardial infarction in the decedent, and that the second dose of Gardasil finally caused a fatal hypotension in this case on the day of vaccination. There was no other plausible cause for the death of Joel Gomez at the night of August 19, 2013.

Journeys From Trust to Tragedy

to the brave souls who had the strength and courage to submit their personal experiences after HPV vaccine administration for publication and to the hundreds of thousands of others who have made similar Journeys from Trust to Tragedy.

Hunter Smith from the Sunshine Coast, Australia received his first shot of Gardasil in 2017 after the family’s new GP brought up the subject. Unbelievably she told Hunter and his mother:

It is a perfectly safe vaccine. The actual batches of Gardasil used in Australia are much better than the ones used in the USA.

After his first dose the only symptom of note was that he seemed more tired than usual but at around three weeks after the second injection he became very unwell experiencing excruciating headache, blurry vision and numbness in his right hand. Soon his headache had intensified and he lost further feeling in his right arm and leg which soon extended to his buttocks and his left leg.

Fearing their son was having a stroke his parents rushed him to the nearest hospital and despite his CT tests clearing him of brain bleed or blockage, his pain and paralysis intensified. His mother recalls one of the nurses accusing him of faking his symptoms and asking him why he didn’t want to go to school.

Finally after his distressed parents pressed for an MRI scan Hunter was given the diagnosis of acute transverse myelitis and required urgent treatment which included high doses of intravenous steroids for the lesions in his spinal cord.

Realising that it was three weeks since his second shot of Gardasil, Hunter’s mother began googling Acute Transverse Myelitis and Gardasil. She quickly came upon the tragic story of Colton Berrett who developed transverse myelitis after Gardasil and died just two months before his 18th birthday.

Hunter’s new doctor agreed that the vaccine was more than likely the cause of his injury. The teen is recovering but it is a slow process. He is receiving chiropractic treatment, physiotherapy, micro-current therapy, homeopathy and detox therapy to remove the heavy metals in his body.

So before we applaud the UK for extending this horrendous vaccine to boys please take some time and read the stories of injury so powerfully told in Journeys from Trust to Tragedy.