Cervical cancer is not a rare event in Australia

Last week Professor Ian Frazer received an honorary fellowship from the Royal College of Physicians in Ireland. In an address the immunologist and co-developer of Gardasil told his audience:

Did anyone question him about this ?

All it takes is a simple search to dispute the professor’s statement.

Seriously how does he get away with saying this when this is so blatantly untrue. 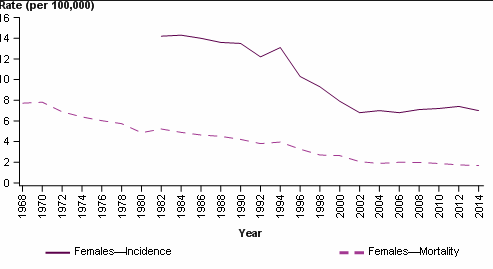 The incidence and mortality of cervical cancer was falling well before HPV vaccination which commenced in Australia in 2007. The welcome decline was due to improved living conditions followed by advent of the Australian National Pap smear program which began in 1991.

Ian Frazer along with his co-developer the late Jian Zhou are responsible for the creation of this genetically engineered HPV vaccine purported to prevent cervical cancer. The marketing of this vaccine was intense and aimed at young women who were made fearful about a disease they had scarcely heard of, let alone likely to develop. Ian Frazer vaccinated the first Australian girl in 2007.

But there is no scientific proof that the vaccine has ever prevented a single case of the disease. However there is evidence of the rising amount of illness and death following the worldwide rollout of Gardasil with the World Health Organisation’s Vigibase recording over 80,000 serious adverse events. And all because of a vaccine that they did not need and that is said to prevent a disease that they were unlikely to ever develop. Tragic!

Inclusion of the boys in the vaccination programs

And this week the UK reversed its previous decision not to vaccinate the boys with the government advisory body on immunisation concluding that vaccination against the cervical cancer-causing human papilloma virus (HPV) should be extended to boys.

Why is this given to boys when clearly they do not get cervical cancer? The reason given is that HPV is supposedly responsible for 60 per cent of mouth and throat cancers.

Who is behind the campaign to extend HPV vaccination to UK boys?

Behind the scenes is the Scottish charity, the Throat Cancer Foundation which has been running a campaign “Jabs For The Boys.” And guess who was on the charity’s clinical and scientific board. Well it’s our very own ‘national hero’ Professor Ian Frazer the co-developer of Gardasil and who was awarded the honour of ‘Australian of the Year’ in 2006. Ian Frazer is no longer on the board.

Then there is the obvious conflict of interest in Professor Margaret Stanley a consultant for Gardasil’s manufacturer Merck remaining on the charity’s board.

Her presence on the advisory board of the Throat Cancer Foundation indicates high-level industry support and influence.

Lately I have been noticing a trend that in articles pertaining to HPV vaccines there is no mention of Gardasil by name.

Reading from the UK Independent

Vaccination against the cervical cancer-causing human papillomavirus (HPV) should be extended to boys, the government advisory body on immunisations has recommended. After an inquiry into the cost-effectiveness of broadening the HPV jab programme, the Joint Committee on Vaccination and Immunisation (JCVI) backed a “gender neutral” scheme. Since 2008, HPV vaccination has been routinely offered to girls aged 12 to 13 at secondary school and is free on the NHS up until their 18th birthday, but there have been growing demands to extend immunisation to boys.

Is Gardasil’s troublesome past precluding its reference?

And could it have anything to do with the fact that Merck   is having to defend itself from an accusation of fraud, deceit and negligence in a US Gardasil case?

In July 2016, a case was filed in the Superior Court of the State of California, Los Angeles County (central district). The case involved a 16-year-old female who between 2010 and 2011 received three injections of Gardasil, the HPV vaccination manufactured by Merck. Shortly after she received her third vaccination, she suffered a severe adverse reaction, the nature and complexity of which, failed to be diagnosed until 2015, when she finally received the diagnosis of Postural orthostatic tachycardia syndrome (POTS).

The young girl’s family are resolute in their belief that the vaccinations caused her illness. Prior to her HPV vaccination she was a very active teenager.  It will be very interesting to see how this case proceeds. Read more about it here.