You couldn’t make this stuff up.

Two young Irish girls protesting against Gardasil a few days ago suffered seizures and needed hospital care, while inside the nearby Royal College of Physicians of Ireland, Professor Ian Frazer the co-developer of the vaccine was giving a speech and spruiking the ‘success’ of the Australian HPV vaccination program.

The protest against HPV vaccines took place on Monday, July 9 in Dublin and consisted of parents and young girls injured after Gardasil along with citizens concerned about the side effects of the vaccine purported to prevent cervical cancer.

Speaking to reporters for The Liberal, protester Angela Collins said:

We’re here to show the stark reality of what the injuries and severe side effects that the HPV vaccine can have. Simon Harris and the government are trying to force all our children, very soon including our boys, to receive the vaccine but yet will not allow us, the victims and their families of the vaccine to have a voice and be heard of how dangerous it is.

Ireland began its Gardasil vaccination program in 2010 beginning with an intense media campaign directed at young girls and their parents and containing a message about a deadly cancer few had even heard of, and the promise of a miracle vaccine.

Around 300 Irish women are diagnosed with cervical cancer annually and the death toll is around 90 so it is safe to say there is no cervical cancer epidemic in Ireland. But there are at least 450 young girls who from all accounts were active and healthy before they had their Gardasil shots and are now very ill.

Many of those attending Monday’s protest were from the R.E.G.R.E.T support group established by parents of teenage girls who have developed serious health problems and who believe that Gardasil is to blame for the illnesses. R.E.G.R.E.T stands for ‘Reactions and Effects of Gardasil Resulting in Extreme Trauma’. They joined with other concerned citizens marching noisily through the streets of Dublin, placards held high urging ‘Justice for the Gardasil HPV girls’.

Laura is one of the so-called Irish ‘Gardasil Girls’. She was a normal active teenager, an “asset in the classroom,” said her mother. After her first Gardasil shot, Laura became unwell and required her mother to pick her up from school. When she complained of dizziness, headache and nausea, she was told this was normal. Her condition worsened after her second vaccination to such an extent that she soon was unable to attend school.

According to her doctors, she was suffering from chronic fatigue syndrome but whatever the experts chose to call these debilitating conditions, the girls and their families are united in their conviction that they became ill after their HPV vaccinations.

HPV Vaccine injury protester MM Bowden called for an independent investigation into the vaccine and said:

It is really sad to see these girls collapsing on the side of the footpath but this is what these families are having to go through on a daily basis with these girls who have been injured by this vaccine and for the government to suggest that this is an imaginary symptom and that these girls are putting this on – this is just an absolute disgrace.

Serious collapse is just one of the extreme adverse events that can occur in teenagers after their Gardasil vaccination. Other frequently reported health disorders include multiple sclerosis, brain inflammation, strokes, seizures, rheumatoid arthritis, disabling fatigue, cardiac arrhythmias, muscle pain and weakness, blood clots and death. According to the World Health Organisation’s database of adverse events there are over 82,000 serious adverse events recorded.

According to the Gardasil package insert the rate of serious adverse events in the trials of Gardasil was 2.5%. This means that for every 100,000 people who are given Gardasil there will be 2,500 serious adverse events, and yet the cervical cancer rate in Ireland is around 8 women per 100,000. Read more about this here: FDA approved Gardasil 9: Malfeasance or Stupidity?

The Irish parents are fighting back, concerned but undeterred by the lack of action on behalf of their government and the HSE, Ireland’s Health Service. The parents are struggling to get help for their daughters. Like so many other sick girls and now boys around the world they are not receiving effective medical treatment. They are often not able to go to school due to their devastating health conditions.

In 2017 there were reports that the HSE had labelled girls with chronic health problems following their vaccination “emotional terrorists”. See this article: ‘Emotional terrorism’: After HPV vaccine uptake rates fall to 50%, the HSE is fighting back

As one protester’s placard makes very clear: ‘We are very, very angry’. Also see this letter: A letter from Jonathan Irwin on the hurtful comments of HSE Director General 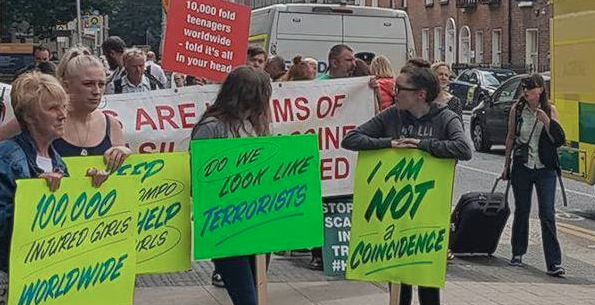 Sean Wynn, who is a teacher from Drumshanbo attended the protest and spoke in support of the vaccine-injured girls. “We hope that people will turn this into a political issue… Each one is suffering in silence.”

Jonathan Irwin the founder of the Jack and Jill Charity for Sick Children has a daughter who was vaccinated with Gardasil and who became so ill that she was bedridden sleeping for 19 hours a day. “It is the most dreadful thing to see your child lose her whole teenage life”, he told Polly Tommey for Vaxxed.com – watch him here:

Researcher and journalist Jeffrey Jaxen makes an interesting point; unlike babies who can’t speak and say that they were feeling great before they had a vaccine, the Gardasil Girls can speak and are doing so. He says Irish mothers are “fiery” and “are kicking some major butt.” “They have succeeded in getting the issue in the mainstream media and are keeping it there.”

What is happening in Australia? According to the database run by the Therapeutic Goods Administration (TGA) there have been over 4200 adverse events after Gardasil vaccination. I have spoken to many of the girls who have or are still suffering serious adverse effects to their health from the vaccination. But the mainstream media will not report this story. We need to become more vocal in this country and like the Irish families get out on the streets.

This August the Australian Vaccination-skeptics Network is touring the east coast of Australia showing the Sacrificial Virgins Film along with a Q&A session. Sacrificial Virgins – so named because the HPV vaccine is often given to girls and boys before they become sexually active – exposes evidence from top scientists and medical professionals of serious neurological damage following HPV injections. It calls for the vaccine to be withdrawn in the hope that this will halt a growing global tragedy. Read about the tour here: Sacrificial Virgins Film And Q & A Tours Australia’s East Coast 2018

Let’s make this event the beginning of some very strong political action in this country on behalf of the vaccine-injured girls and now boys.

This article was first published on the AVN website