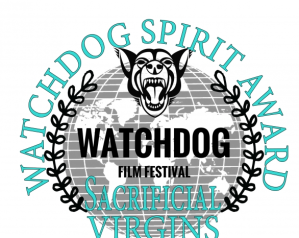 Sacrificial Virgins a documentary film trilogy – which investigates widespread global concerns over the safety of  HPV vaccines,  Gardasil and Cervarix has won 2 awards for investigative journalism: The prestigious  Best of the Festival award and the Watchdog Spirit Award at the Watchdog Film Festival, held in Brisbane, Australia.

“Shenton’s thorough, transnational investigation in search of truth and justice deserves recognition and thus the Watchdog Film Festival has awarded her and her team the Watchdog Spirit Award. Individuals such as Ms Shenton and her team play a very important role in identifying and documenting questionable practices within institutions with the hope of increasing accountability and initiating changes for the betterment of society.”

It is incredible this worthy award originated in Australia where HPV vaccines such as Gardasil are exhaustively endorsed by the state. News of the award came on the very same day that the industry, enthusiastically aided by the mainstream press  was claiming success for their vaccine.

Cervical cancer could be effectively eliminated in Australia within the next four decades… Research published by the International Papillomavirus Society, lead by doctors in Melbourne, showed a dramatic decline in the rate of Human Papillomavirus (HPV) in women aged up to 24.

The suitable surrogate end-point (or marker) chosen for the efficacy of the HPV vaccine was cervical intra-epithelial neoplasia (CIN) grade 2/3 lesions, and adenocarcinoma in situ. This surrogate end-point was decided even though these precursor lesions are common in young women under 25 years and rarely progress to cancer.

The very best way to prevent cervical cancer is not by using vaccines but by improving the living conditions of women worldwide and the implementation and retention of cervical screening programs. Cervical cancer rates halved after the introduction of the Australian National Cervical Screening Program which began in 1991 but are on the rise again as can be seen from this graph published in The Sydney Morning Herald.

The increase in cervical cancer cases starts around the time HPV vaccines were introduced. Australia approved Gardasil in 2006 and the vaccination program began in 2007.

In the years leading up to the fast-tracked HPV vaccines the scourge of cervical cancer was heavily promoted by the media. It was promoted as a disease that was caused by a virus followed by news that a new vaccine would save the day. However the fact is the human papilloma virus affects most of us at some stage in our lives and is successfully dealt with by our immune system. There is no epidemic of cervical cancer in western nations. As Professor Peter Duesberg states very clearly in Joan Shenton’s excellent doubly awarded documentary Sacrificial Virgins

Even so researchers continue to tell the ‘spurious, good news’ tales crediting the vaccines:

Professor Suzanne Garland, the director of the Centre for Women’s Infectious Diseases at the Royal Women’s Hospital, said she expected the number of cases each year would drop from about 1,000, to just a few, thanks to the vaccination and the new DNA screening test.

“That’s massive. Where else have we seen the elimination of a cancer?” she said.

“That’s contingent on a high coverage of vaccine. Australia is really in the lead here, [there’s been] really good coverage through the school-based free vaccine program.

Yes, get the poor kids vaccinated at school. Give them free vaccines. This is how the industry works. And then sadly the sickness industry has them for life. The side effects of Gardasil are now well known and include:

Unsurprisingly the industry continues to support its HPV vaccines even though there is no scientific proof that Gardasil, Cervarix or Gardasil 9 have ever prevented a single case of cervical cancer anywhere in the world. But there are at least 84,000 reported adverse events in girls and boys following HPV vaccination and over 300 deaths.

I therefore endorse the conclusion to The Sacrificial Virgins trilogy:

that if the HPV vaccine’s only proven benefit is to prevent HPV, but not cervical cancer, then the risks far outweigh potential benefits and therefore the drugs should be withdrawn pending further independent investigation.