Write what you need to write! 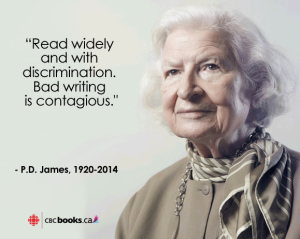 “Write what you need to write, not what is currently popular or what you think will sell.” James’ publisher, Faber & Faber, has reported that the acclaimed British mystery writer P.D.James died on Thursday, November 27 at the age of 94. I wasn’t particularly keen on her writing and have probably only read one or two of her crime novels. I remember reading Death Comes to Pemberley where Elizabeth and Darcy, now six years married, are preparing for their annual ball when festivities are brought to an abrupt halt. This more recent P.D James novel is now a TV mini series which starts on ABC TV this week.

But it’s not her books that I wish to engage with, rather it’s her thoughts about writing as expressed in a CBC interview: “Write what you need to write, not what is currently popular or what you think will sell.” I’m not sure how closely she followed her own advice for crime novels are popular and do sell.

These days to be a writer and earn a living it seems that you need to write about what is popular and what will sell or you won’t be published. That’s why we all write blogs these days – at least we can write for ourselves and for our followers. There are fewer and fewer avenues to pitch one’s work, and even then it seems that there is a popular style that one must adhere to or be ignored.

I recently pitched an extract from a new book being published by Spinifex Press. “I Hate Feminists!” by Mélissa Blais which examines the collective memory that emerged in the aftermath of the massacre of fourteen young women at the engineering school École Polytechnique de Montréal on December 6, 1989.  “I Hate Feminists!” is a timely new release when you consider that just two weeks ago Time Magazine urged its readers to vote in the 2015 annual word banishment poll. ‘Feminist’ along with words such as ‘disrupt’ and ‘kale’ and internet slang words such as ‘yaaasssss’, and ‘turnt ‘ was on Time Magazine’s list for banning. Then there’s Julie Bishop, Australia’s only female cabinet minister who also has a problem with the word feminist. Bishop doesn’t describe herself as such, saying she doesn’t find the term useful today. “I’m a female politician, I’m a female foreign minister … get over it.” The successful politician refuses to admit the debt she owes  feminism.

Real change is what feminists are working towards, and that includes the transformation of gender relations toward equality between men and women. To bring this about, we must above all not think that feminism is a thing of the past, or that equality between men and women has been attained. Therefore stories about such horrific true crimes and the way that the public makes sense of these are very important. So in light of this and the fact that the coming week is the 25th anniversary of the massacre of fourteen young women at the engineering school École Polytechnique de Montréal, a pitch was made to one of the daily papers to run an extract from the book. The offer was turned down in the end because it was considered too academic. Makes you wonder who reads newspapers, are they read anymore, or just the online pieces that titillate and SELL.

Here is the rejected extract taken from “I Hate Feminists!”: December 6, 1989 and its Aftermath

On December 6, 1989, at around 5p.m, as the women engineers-to-be at the École Polytechnique were studying or writing their end-of-term examinations, Marc Lépine, a twenty-five-year-old man dressed in army fatigues, went up to the second floor of the school and entered a classroom occupied by about sixty students, female and male. He separated the class into two groups and told the men to leave. When he was alone with the women students, he proclaimed: “I hate feminists!” One of the students, Nathalie Provost, replied that they were not feminists. He fired. It was 5:10 p.m., and a call immediately went out to emergency services. Marc Lépine left the classroom and fired at several other women as he moved to the third floor. The police arrived on the scene between 5:23 and 5:34 p.m, but stayed outside the building. In a classroom on the third floor, Lépine fired on more women students, and then took his own life with a final bullet at 5:29 p.m. The police entered the building at 5:37 p.m and began evacuating the injured around 6:05 p.m. Marc Lépine left fourteen women dead and fourteen people wounded.

The killer was not known to the police. The newspapers revealed his identity the day after the shootings. The daily newspaper La Presse described his father’s Algerian origin and gave his birth name, Gamil Gharbi. It was then that we learned that he was out to get feminists. The Montreal police department had given the media a summary of his motives as expressed in the suicide note found on his body. With the note was a list of women and men he had been planning to murder; women who were pioneers in their fields (including the first woman firefighter and the first woman police officer), well-known feminists, and members of a profeminist group, the Collectif masculin contre le sexisme (Men’s collective against sexism). However, the public would not have access to the contents of the letter until November 24, 1990, when a contributor to La Presse, Francine Pelletier, received a copy of it, sent anonymously. In the letter, Lépine explained that he was committing suicide “for political reasons.”

He stated that he had decided “to send the feminists, who have always ruined my life, to meet their maker.” He had decided to “stop those viragos.” Looking into the future, Marc Lépine then said that “even if the media call me a Mad Gunman, I consider myself a rational, educated person.” He reiterated that “feminists have always enraged me. They want to keep the advantages of women (e.g, cheaper insurance, extended maternity leave preceded by a preventive leave, etc.) while seizing those of men.” Feminists were “so opportunistic that they do not fail to take advantage of the knowledge accumulated by men through the ages. Yet they try to misrepresent it whenever they can.” He saw feminists as rewriting history and claiming that they played an equal part in wars. “A real Casus Belli,” he said in the conclusion of his letter, suggesting that feminists’ actions could start a war, the war he had decided to wage by murdering fourteen women. Referring to his list of nineteen names, he stated that those persons had “nearly died today. Lack of time (because I started too late) has allowed these radical feminists to survive. The die was cast…

In spite of Lépine’s anti-feminist declarations, the analysis of more than 600 texts and related documents confirms that his intentions have often been obscured in the press. In the first year after the massacre “the feminist perspective represented barely more than one tenth of all analyses in the press coverage of the tragedy”. The discourses that emerged in the media marginalized, dismissed, co-opted and even disparaged feminist analyses.

While feminists have for over twenty years been mobilizing and continuing to raise public awareness about violence against women, denouncing the fact that it usually involves one or more men taking power over one or more women, antifeminists of every stripe have been trying to throw up roadblocks and reinforce the stereotypes of feminists. “Feminists cause harm to men,” exclaim some; “they think all men are potential Lépines,” complain others. With such prejudices, how can we grasp what feminists really said after the December 6 massacre? While a tiny minority of women denounced “the Marc Lépine that lies dormant in every man we come into contact with,” that was not the case for the majority of feminists who expressed themselves in the media following the massacre. In spite of that, journalists quickly led us to believe that all feminists have simplistic views about men, caricaturing the feminist movement.

If we look more closely, what some feminists have denounced is more the privileges all men gain because of violence against women, in the same way that racism benefits all white people, even anti-racist whites. Don’t we all profit from the wealth produced by the land stolen from the First Nations? In the same way, violence against women benefits all men. Indeed, who gains from women’s insecurity and fear if not the men who are proclaimed “saviours” or “protectors”? Who benefits from the fact that women are confined in the domestic space when they are afraid to go out at night? You do not need to be a violent man to gain an advantage—unintentionally—from the fear and insecurity of women, who will seek the company of a man in order to be able to move around in peace.

Sympathy for the killer persists, and there are more and more imitations of his act, such as death threats made in 2005 by Donald Doyle, who said he wanted to finish Lépine’s work by targeting and murdering women, and in the United States, where a man went into a fitness centre during an aerobic dance class, and killed only women (three dead and nine wounded). Not to mention all those men who kill women, “their” women, their wives or partners, murders that are too often called “domestic tragedies” in the media.

I think that this is an important extract which should have been given a run on the 25th anniversary of the massacre of fourteen young women at École Polytechnique in Montreal. Too academic? I don’t think so!