Our world in transition

Petra White wrote this evocative poem, published in The Age on Saturday October 11

A History of the Siege 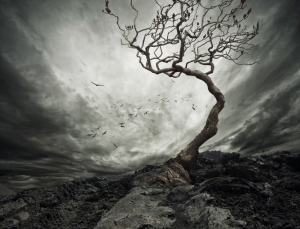 Nothing can stop them,

and now we can say, at last, it is dark.

On Manus, they are walking along fine edges of themselves,

Nobody follows them, they would lead

only to an end of the world.

When was it darker than this?

Oh it was darker.

And the darkness is genuine,

our fingers have been dipped in it, it is felt

by all who would feel.

Where does it come from?

Us, in our masses, the massing cloud?

Our politicians, they who balance us

in their thready hands, and then plunge portions

of us and them into the pit?

Up there, a human form lies over the land.

I really appreciate this poem; it speaks of our world today.

Our dark times was the subject of a recent article by Joseph Camilleri, Emeritus Professor of International Relations at La Trobe University, in which he wrote:

We appear to have reached one of those extraordinary moments in history when people everywhere, communities and even entire nations, feel increasingly stressed and vulnerable. The same may be said of the planet as a whole.

Last night I attended the second of Joseph Camilleri’s  public lectures called Rethinking the Future. His topic:  Coping with Risk and Uncertainty: Volatile Markets, Anxious States and Tentative Social Movements. He described our world as one in transition where people, goods & services, capital, technology, arms, information, images, carbon emissions, and viruses move across borders at ever increasing scale, speed & intensity. Such rapid transition, he claimed creates certain risks and stresses experienced by people, communities and the planet. We’re familiar with the stresses and we also understand that these will only get worse.

But what was really disconcerting was his assessment of our governments’ abilities to handle the many crises facing us – describing this as very limited. You can give up any hope that those in power will come to their senses and govern ethically with concern for the wellbeing of the planet and its inhabitants. For they are accustomed to finding themselves trapped between competing pressures and maintain the tendency to overstate certain dangers and understate others. For example: The Australian government’s overreaction to refugees and on the other hand its understating of the need to act on climate change. We witness this happening of course but it is good to have it explained, and more debate and discussion on this state of affairs can only be a good thing.

So where is any change or agitation to come from? During the lecture we were reminded of the wonderful social movements that graced our lives in the 1960s and 70s: feminism, student activism, gay liberation, civil rights, peace activism, and environmentalism.  Such movements:

These social movements are still in existence but are less visible and less active. They are unlikely to gather sufficient numbers to force change.

Joseph Camilleri concluded rather optimistically that though the future will be difficult, all is not lost; dynamic knowledge remains, our technical skills enable greater transparency and accountability, and there is increasing disenchantment with politics and business as usual.

This is a good sign although disconcerting as unrest is sure to ensue as the public sector shrinks and with it diminished access to public health, housing, and a healthy, happy environment.

Bring on the revolution!