Constancy and tranquillity are trashed in our market-driven world

Are you sick of this market-driven world? You should be, writes George Monbiot.

These words speak to those of us who feel at odds with life.

I live across the road from a new housing development, the creation of which has disrupted my tranquil mornings, my peaceful days, and heightened my angst with ‘the self serving con of neoliberalism’ that Monbiot claims has eroded the human values the market was supposed to emancipate’. The 300 new dwellings have no gardens to speak of  and are cluttered so closely together that any semblance of privacy will be nigh impossible. Human values and common courtesy have no place in the rush to transform this once quiet green neighbourhood. Both young and mature gum trees have been sacrificed to this altar of greed where  bulldozers and excavators fire up at 7 and don’t stop until tea time. But it will be all worth it in the end, won’t it? Mass produced, shoddy dwellings for 1100 more residents – whatever it takes! 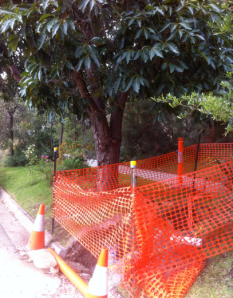 On my nature strip I have a large tree – a constant feature and the provider of ample shade in the hot summer  months. Without consulting me, the construction company dug a deep hole  around the tree exposing its roots in order to access infrastructure. Calls to the company resulted in mere excuses that the work is delayed and the backfill of the tree is not imminent. Although the council arborist has assured me the tree will not suffer, I am not so sure and have taken photos of the tree in its splendour and again in its present state- with its roots dangerously exposed. Constancy and tranquillity are trashed in our market-driven world and as a result I am at odds with the world and not ashamed to say it.

My angst is common, for it is now recognised that we are witnessing a time in history when individuals, communities and countries are becoming increasingly stressed and vulnerable.  Writing for The Conversation Professor Joseph Camillleri  asks:  Is a vulnerable world teetering on the edge of a new Dark Age? And how do we explain the long list of financial, environmental and humanitarian emergencies, epidemics, small and larger conflicts, genocides, war crimes, terrorist attacks and military interventions? Why does the international community seem powerless to prevent any of this?

He explains that a new cold war is in the making amidst our costly military interventions in the middle east . But our unease about endless wars and the future of humanity are not shared by those whose dominant narrative is that of market fundamentalism. Many seek to do very nicely out of our intervention in Iraq once again. Stock prices for Lockheed Martin, General Dynamics, Raytheon and Northrop Grumman set all-time record highs last week as it became increasingly clear that President Obama was committed to a massive, sustained air war in Iraq and Syria. In fact, It’s nothing short of a windfall for these and other huge defense contractors, who’ve been getting itchy about federal budget pressures that threatened to slow the rate of increase in military spending.

Monbiot reminds us that : The market was meant to emancipate us, offering autonomy and freedom. Instead it has delivered atomisation and loneliness. I don’t envy my new neighbours who are buying into the housing development and taking out huge mortgages they can ill afford. 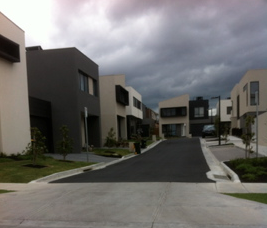 Their massive houses are surrounded by concrete, they have no cooling gardens. There will be little time to walk in the park , most will spend the best years of their lives working at meaningless jobs that do little to foster humanity. It’s no wonder so many of us feel at odds with the world.

Monbiot offers reassurance as he writes:

So, if you don’t fit in, if you feel at odds with the world, if your identity is troubled and frayed, if you feel lost and ashamed – it could be because you have retained the human values you were supposed to have discarded. You are a deviant. Be proud.