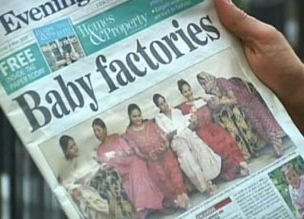 On ABC TV’s ‘Foreign Correspondent’ program July 8, reporter Jane Cowan took a critical look at commercial surrogacy. The Last Resort was filmed in Cancun, Mexico where poor women, often from rural villages come to the popular tourist city hoping to become surrogate mothers. In Mexico successful surrogates are paid up to $13,000 for the delivery of a child to desperate infertile western couples.

The business of surrogacy takes place at Planet Hospital, run by ‘rogue operator’ Rudi Ruprak, a former software developer. Now I would have thought that anyone running a surrogacy business would have to be medically trained but this is not how it happens at least here in Mexico, and in India and Panama where Ruprak has operated and left failed surrogacy ventures.

A former employee-turned patient claimed that Ruprak targets gay couples and single people who due to India’s new surrogacy laws find it difficult to access surrogacy there. In Cancun, Planet Hospital draws its surrogates from poor women, often those escaping male violence, women essentially alone and vulnerable. One of the women featured on the program dreamt of becoming a surrogate so as to earn enough to set up a business enabling her to support her extended family. Sadly her hopes were never realised. When she miscarried at four months, Planet Hospital had already closed its doors leaving the former surrogate penniless and alone in Mexico. She mourns the loss of the child saying :’We also have feelings’. And the gay man who spent $22,500 on embryos could not even access them because as the business went belly-up his embryos were locked away and only accessible should he agree to pay off some of the failed companies’ debts.

I think that this was a powerful program and one that concentrated on the lack of regulations that exist in the industry. There was not a lot of emphasis on the abuses that the women are subjected to, such as the physical effects of the surrogacy and its accompanying treatments, the deprivation of a normal life for the nine months when the women are essentially locked up and kept apart from family and friends. And then if they make it to the end of the pregnancy, once they give birth, they are separated forever from the child. This is abuse and exploitation of women and especially of the poorest, most vulnerable of women who have little job prospects and need this money to improve their families’ lives.

This program makes us think: Does everyone have to have a child? Because this is an industry that only exists because increasingly society seems to believe that everyone is  owed a child while in reality there are plenty of unfortunate children who need the love and attention of rich, childless people.

Kajsa Ekis Ekman, author of ‘Being and Being Bought: Prostitution, Surrogacy and the Split Self’ claims that surrogacy is ‘child trafficking’. She refers to the industry as a ‘capitalist creation story’ where the parent is the one who pays and the product is a baby. Ekman is to speak at the Festival of Dangerous Ideas at the Sydney Opera House in August. The organisers of the festival have labelled her talk with the provocative title: Surrogacy is child trafficking. Kajsa’s presentation is sure to get the attention it deserves!