Carbon dioxide has received a lot of bad press over the last few years but as far as human health is concerned the chemical compound is vital.

Last week the Austin Hospital intensive care specialists announced that they plan giving patients recovering from a cardiac arrest higher levels of the gas in a bid to boost their long-term recovery. Carbon dioxide is a gas produced in the body as a bi-product of the process of metabolism.  Contrary to what many people think, we require carbon dioxide in our blood for healthy living. During the process of respiration, excess carbon dioxide is removed from the body and replaced by oxygen leaving a certain amount of carbon dioxide in the blood. And it’s the existence of the right levels of this gas in the bloodstream that greatly affects the functioning of our bodies, as I have personally discovered.

I have become rather interested in my own carbon dioxide levels over recent months following a prolonged period of emotional turmoil resulting in insomnia, with the scant sleep I did manage, constantly broken by snoring. Subsequent sleep studies revealed some degree of obstructive sleep apnoea, but  rather than submit to a CPAP mask I sought an alternative solution.

My research into my sleep disorder led me to a book written by Tess Graham called Relief from snoring and sleep apnoea  in which I have learnt that how we breathe determines  our quality of sleep, and that sufficient levels of CO2 in our blood are vital. 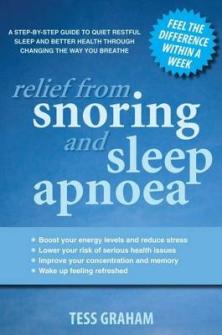 When we hyperventilate or over-breathe during sleep- this is particularly likely after a stressful day or a heavy meal,  our blood levels of CO2  become too low and we can stop breathing. This is called sleep apnoea.  Low levels of CO2 are problematic as the gas has many important roles as a regulator of body functions.  One of carbon dioxide’s important roles is facilitating the cellular uptake of oxygen.

When we breathe normally the haemoglobin molecules (oxygen carriers) in our blood cells have almost maximum oxygen saturation but in order for this oxygen to be released to cells, sufficient carbon dioxide is needed. The more CO2 in the blood, the more oxygen is released meaning more cells are oxygenated. On the other hand, when our CO2  blood levels are too low, oxygen clings to red blood cells and less oxygen is released leaving cells starved of oxygen.

Carbon Dioxide, writes Tess Graham, is not just a waste gas. It is the body’s natural bronchodilator, antihistamine, tranquiliser and muscle relaxant. It assists blood flow and oxygen transport by relaxing blood vessels. As has already been explained carbon dioxide facilitates oxygen delivery to the cells and it also enhances digestion and regulates nervous tension.

Graham’s message is clear: By learning to breathe more gently, smoothly and efficiently we can improve our sleep and health. She explains the mechanics of respiratory physiology and has included some simple breathing exercises to practice daily.  I have cause to wonder why we haven’t heard this before. Why aren’t doctors aware of the dangers of incorrect breathing and the need to retrain the way we breathe, rather than simply referring their patients to sleep clinics and the uncomfortable and intolerable CPAP masks. Sleep apnoea needs treating for  the health risks are well-known and include high blood pressure, increased risk of heart attack and stroke.

So having read Graham’s book, I wasn’t at all surprised to read in the news this week that CO2 could be very important for heart attack patients and that thousands of heart attack victims in Victoria could benefit from a world-first study using carbon dioxide (CO2) to improve survival rates and reduce brain damage. Austin Hospital intensive care specialists are planning on giving patients recovering from a cardiac arrest higher levels of the gas in a bid to boost their long-term recovery. ICU research manager Dr Eastwood said CO2 had a bad reputation, but it played a vital role in breathing. “Slighter higher CO2 levels actually have an anti-inflammatory, antioxidant and anti-convulsive properties and these are important for protecting the brain after a heart attack,” he said.