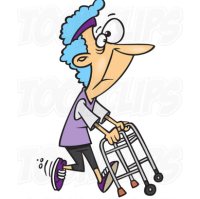 Though I’m accustomed to shoving my way through shoppers, trolleys, walking aids, and the odd bike or two, once school holidays hit, it’s the grannies herding hoards of school kids and reining in a toddler or two, who I struggle to avoid.

The role of grandmothers as major providers of informal childcare for infants and toddlers is a subject dear to my heart. I’m a granny myself and while I’ve been known to step up and provide care when really needed, I have reservations about this increasing expectation that we care for our grandchildren, when their parents return to work.

Nearly 300,000 Australians aged between 50 and 74 care for their grandchildren with a third of these also employed in paid work, according to National Seniors Australia. But what’s it like to be caring for grandchildren when you are in your sixties and seventies?

For many grandmothers the experience of caring for a grandchild is mostly positive. In New Age Nanas: Being a Grandmother in the 21st Century, Doreen Rosenthal & Susan Moore conducted research on today’s grandmothers. They interviewed 1205 grandmothers – the average age was 63 years. The interviewees were mostly well educated, happy, healthy, English-speaking, working and partnered. Overall these grandmothers welcomed the arrival of a grandchild regarding the experience as ‘a magical love’ and one that for most was an experience that far outweighed any of the ‘anticipated downsides’.

However not all the interviewees were completely happy with their role as ‘hands on’ grandmother. Many of the women were still working full-time and found it necessary to cut back their working hours in order to juggle their role as grandmothers, and often as carers for ageing parents.

“I never have a day to myself anymore,” sighed Sue. “Now I’m minding my grandchildren three days a week and working the other two – it’s just getting too much. The 66 year-old part-time nurse explains that the pressure for her daughter to work longer hours comes from her son-in-law. Sue isn’t happy about this and yet she feels she must help out with the childcare for her daughter’s sake.

Sue’s dilemma is not unusual. Another friend is having similar pressures imposed on her with her daughter’s husband also insisting his wife returns to work. This leaves Miriam with a difficult choice. On the one hand she doesn’t think that it’s fair she’s being asked to step up just because they’re finding it difficult reining in their consumption. “You know, Helen, if it was genuinely to make ends meet I wouldn’t mind so much but it’s not for basic needs and I really feel exploited,” she says. “It’s just not fair.” But on the other hand the retired librarian loves being with her grandson and so generously gives of her time.

We often think of grandmothers as elderly women with time on their hands – women who’ve reared their families and who look forward to time with their grandchildren. But 21st century grandmothers are often divorced women, like myself, still working and supporting our selves and not nearly as fit as we were when we were rearing our  children.

“If it’s occasional care, it’s easier,” claims Anne McLeish, director of Grandparents Australia. Grandparents provide informal care for 52% of infants and toddlers in childcare, saving families $88 million in childcare costs each year and as McLeish asserts: “The government is counting on this voluntary care and cutting back on Community child care.”

“On the other hand raising children is hard work,” says McLeish. Up to 15,000 grandchildren live permanently with their grandparents who typically assume full parenting responsibilities when their adult children are not able to care. This maybe due to substance abuse, neglect, incarceration, mental illness, divorce, and death.

As most parents will testify it’s expensive bringing up children these days and especially for grandparents who are out of the workforce. “But who else is going to take on this role” asks McLeish. It’s wonderful that many grandparents are happy to take on another round of childcare but I wonder whether there is resentment at this extra burden that besets them in later life. “Some of these grandparents do feel very exploited,” says McLeish. “But I’m glad to say that many grandparents are getting more thoughtful about. I tell them they need to have a family conversation about who does what-even the children can mow the lawns. And they need to write this down so that it is enforced.”

The image of the white-haired elderly women awaiting the pitter – patter of little feet is one that many modern women are ditching. Instead we’re pounding the treadmills, opting or not for botox, with Ipad and mobile never out of reach. We’ve thrown out the bikes, scooters, and toys, but the empty nest is still a dream as young adults remain at home and parents require care. It’s a dilemma faced by so many of us now sandwiched between two, now three, generations of semi-dependants.